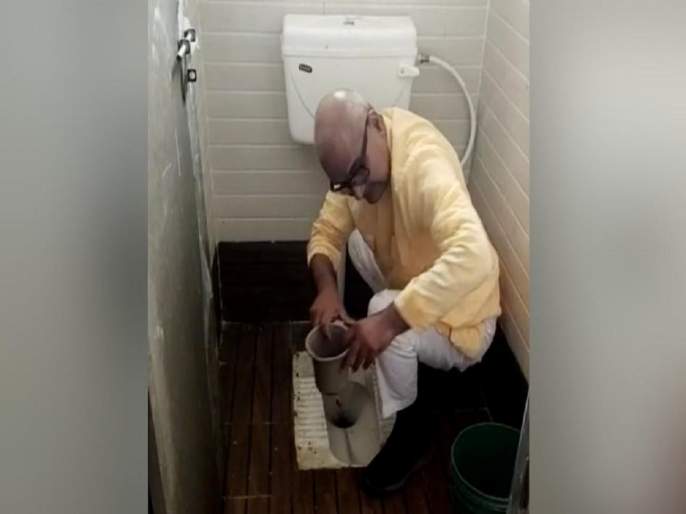 New Delhi : BJP MP Janardan Mishra from Rewa district in Madhya Pradesh has once again become a topic of discussion. A video of Bharatiya Janata Party MP Janardhan Mishra, who is always in the news due to controversy, is going viral. In this video, he is seen cleaning the school toilet by hand. The MP went to Balika Vidyalaya Khatkhari in Rewa district. In fact, he cleaned the toilet with his hands without even taking a brush and wearing gloves.

Under the Seva Pakhwara being run by the party, Yuva Morcha cleaned the toilets of the school after the tree plantation program at Balika Vidyalaya Khatkhari.@narendramodi@JPNadda@blsanthosh@ChouhanShivraj@vdsharmabjp@HitanandSharmapic.twitter.com/138VDOT0n0

After touring the school, Mishra noticed that the toilet in the school was in bad condition. Seeing this, he decided to clean the toilet by hand. The special thing is that Mishra cleaned the toilet with his hands without taking any brush or gloves. He has also given a message to maintain cleanliness by cleaning the toilet by hand.

Controversial statements
Janardhan Mishra said on this occasion, “It is necessary for everyone to maintain cleanliness. From Mahatma Gandhi to Narendra Modi, the father of the nation has been giving the message of cleanliness. This is nothing new. I have cleaned toilets before.” Earlier, Mishra had gone door to door to collect garbage by driving a rickshaw, even then he was much talked about. He has been in the limelight many times for his controversial statements. He was in the limelight for some statements such as hang the garbage collectors.

Web Title: A video of BJP MP Janardan Mishra cleaning a school toilet with his hands is going viral