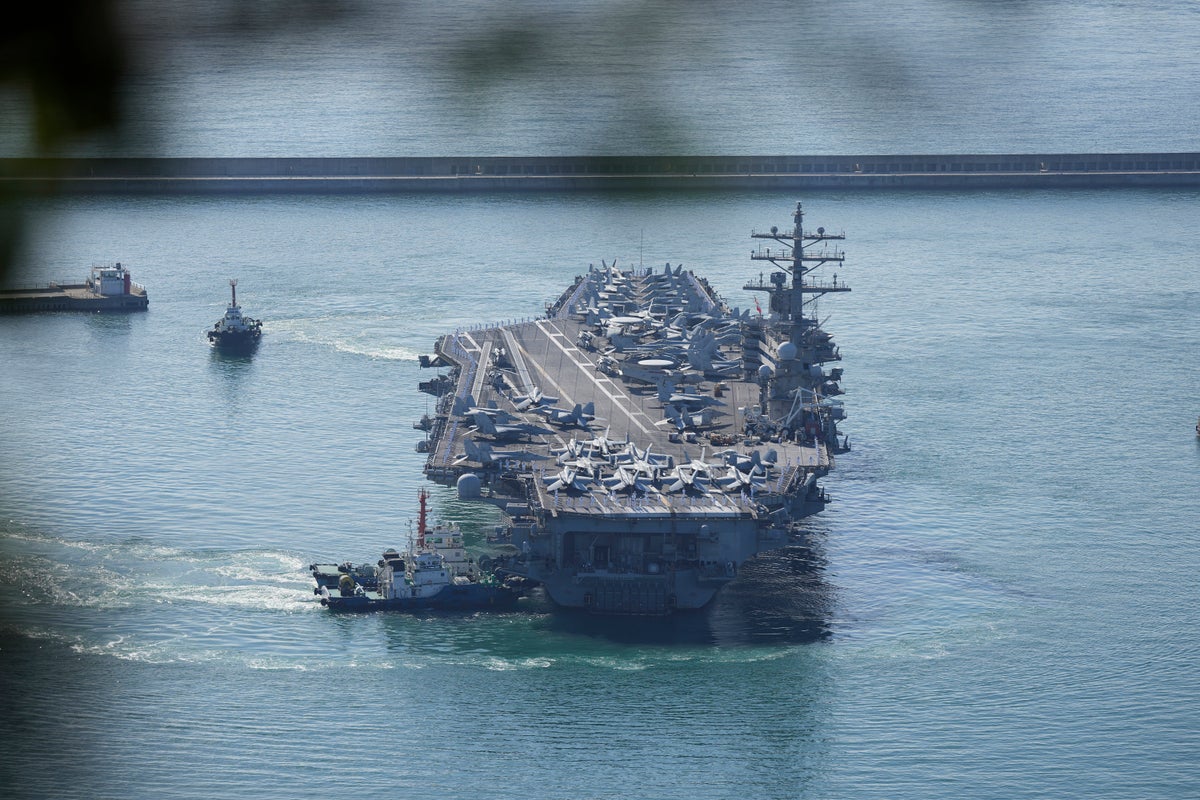 The nuclear-powered aircraft carrier USS Ronald Reagan arrived in the South Korean port of Busan on Friday. Before the joint military exercises of the two countries that aims to show strength against North Korea’s growing threat.

The joint exercise will be the first involving a US aircraft carrier. In the region since 2017, when the United States sent three aircraft carriers, including Reagan, to conduct naval exercises with South Korea in response to North Korea’s nuclear and missile tests.

This year’s allies have revived their massive military exercises that were downsized or canceled in previous years in support of negotiations with Pyongyang or as COVID-19 responds to the start of major weapons testing. of North Korea and the growing threat of nuclear conflicts with Seoul and Washington.

The South Korean Navy said the joint exercises with the Reagan Combat Group were meant to increase the military readiness of the Allies and to show. “A Solid Solution by the Korea-US Alliance for Peace and Security on the Korean Peninsula”

The threat from North Korea is also expected to be a key agenda when US Vice President Kamala Harris will visit South Korea next week. After attending the funeral service in Tokyo for the murdered former Japanese Prime Minister Shinzo Abe.

Reagan’s arrival in South Korea comes after North Korean leader Kim Jong Un told Pyongyang’s rubber-stamp parliament this month. He will never give up the nuclear weapons and missiles he needs in response to what he sees as the enemy of the United States.

North Korea has also passed new laws that establish its status as a nuclear power and allow exploitation of nuclear weapons in a variety of situations. where a country or leadership is under threat

Diplomats have reaffirmed the commitment of the United States. To protect South Korea in the event of a nuclear war with full military capabilities. including nuclear The allies also maintained months-old assessments that North Korea was preparing to conduct its first nuclear test since 2017 and discussed “rigorous” countermeasures, the ministry said.

North Korea has ramped up its weapons tests to a record 2022, launching more than 30 types of missile weapons, including intercontinental ballistic missiles, since 2017 as it exploits divisions in the UN Security Council that intensify its war. Russia and Russia’s Ukraine

Meanwhile, North Korea’s ICBM has attracted a lot of attention from the US. Because it may be a threat to the homeland of America. North Korea has also expanded its arsenal of nuclear capable short-range missiles designed to evade missile defenses in South Korea.

The expansion of North Korea’s arms arsenals and the threat of exploitative nuclear attacks have raised concerns in South Korea about the credibility of North Korea. The US “nuclear umbrella” that protects its allies in the event of war.

President Yun Seok Yeol of South Korea which is the Conservative Party, which took office in May. It has pledged to increase South Korea’s conventional missile capabilities. and work with the Biden administration to develop more effective strategies to deter North Korean attacks.

senior US officials And South Korea met in Washington this month to discuss allied deterrent strategies. and issued another statement confirming that “Nuclear attack Any (North Korea) response will be overwhelming and decisive.” including nuclear (One)” to provide a protracted deterrent to South Korea.