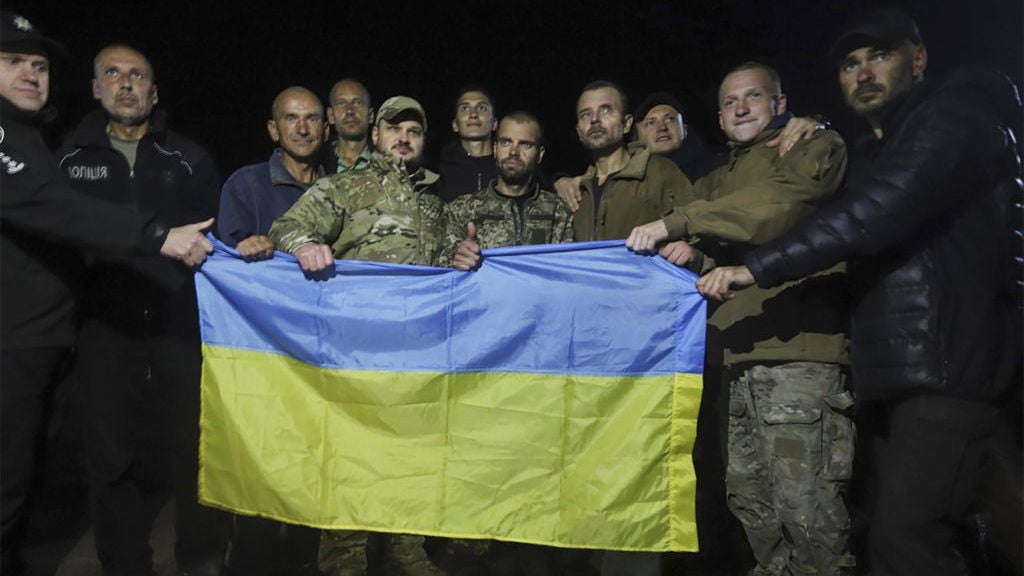 Ukraine has announced an exchange of high-profile prisoners. After trying to release several fighters protecting the steel plant in Mariupol. During the months-long siege of Russia

President Volodym Zelensky has said his government has gained freedom from Russian detention for 215 Ukrainian citizens and foreigners with help from Turkey and Saudi mediation efforts.

Many, he said, were soldiers and officials facing the death penalty in Russian-occupied territories.

Out of 200 Ukrainians were traded with only one man — Viktor Medvedchuk, a pro-Russian opposition leader. who is Ukrainian

The 68-year-old oligarch escaped house arrest in Ukraine days before the February 24 Russian invasion but was arrested in April.

Russian officials did not immediately comment on what appeared to be the largest prisoner exchange in nearly seven months of war.

Russian President Vladimir Putin is believed to be the godfather of Medvedchuk’s youngest daughter. And his detention sparked heated exchanges between officials in Moscow and Kiev.

He heads the Political Council of the Opposition for Life in Ukraine, the largest opposition group in the Ukrainian parliament. The government has suspended the activities of the party.

“It’s not a shame to leave Medvedchuk for a true warrior,” Zelensky said in his nightly video speech.

“He has passed all the investigations required by law. Ukraine received from him everything necessary to establish the truth in the framework of criminal proceedings.”

to exchange again Ukraine has won the release of five commanders, who lead the defense of Ukraine’s Azovstal steel plant in Mariupol, in exchange for 55 Russian prisoners being held back, Zelensky said.

More than 2,000 defenders, many from the Azov regiment, marched from the ruins of the Azovstal steel plant into Russian prisoners in mid-May. The siege of the port city of Mariupol ended almost three months.

Zelensky said the five leaders, including military commanders Denys Prokopenko and Svyatoslav Palamar, were in Turkey, where they would remain part of the deal. “in complete safety” until the end of the war Under the protection of Turkish President Recep Tayyip Erdogan .

The elaborate prison exchange also led to the release of 10 foreigners, including five British and two US veterans who had fought with Ukrainian forces.

They were released by Russian-backed separatists. as part of an exchange mediated by Saudi Arabia US officials and Saudi Arabia said

UN Secretary-General Antonio Guterres welcomed the exchange. He called them “not small” but added that “there is still a lot to be done to alleviate the suffering caused by the war in Ukraine,” his spokesman said.

On November 3 by-elections in seven assembly constituencies of the...