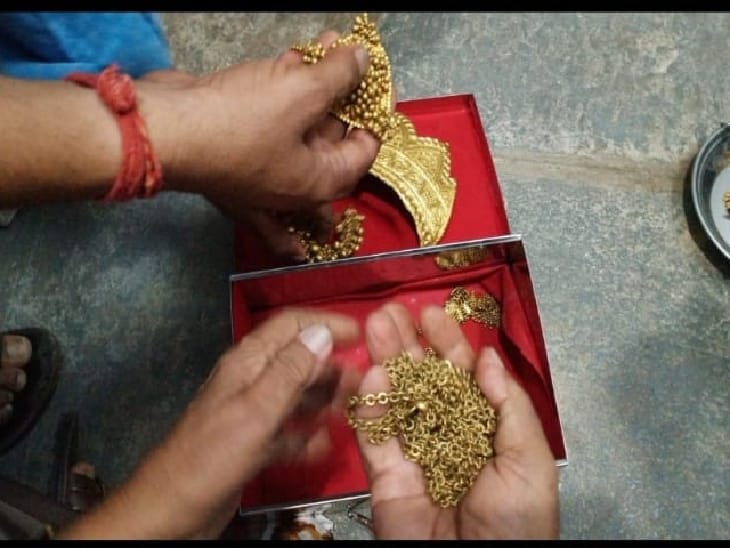 The mahants and pandits of the Kalika Mata temple came to collect the ornaments.

Shardia Navratri starts from Monday. So three days ago on Friday, Mahant and Pandit of Durga’s Kalika Mata temple have taken mother’s jewels to the temple with security from the treasury office. 5 armed jawans have been sent by the police department to perform duty for 9 days. Various routes have been designed to reach the temple to avoid rush.

Mahant Kalika came to take the jewels of Mata

This time Shardia Navratri will be celebrated with great fanfare in the entire district after the complete end of Corona. All public programs will be held. The temple of Kalika Mata in the fort is highly trusted by the people. The decoration work of the temple has also been completed. Temple Mahant Ram Narayan Puri and Pandit Arvind Bhatt had sent a request to the management for gold ornaments. After which both of them reached the treasury office in the collectorate today and took out the mother’s jewellery. The jewelry had weight. Along with this, the police administration has deployed 5 armed men in the temple. Mother will be adorned with these ornaments from Monday. At the Kalika Mata temple, the hoon is performed by the Maharana Darbar on Ashtami, while on Navami, the hoon is performed by the trust.

Fort outpost in-charge Bhor Singh said that this time there is a possibility of more crowding after Corona. In such a way, the way to enter and exit the temple has been made. People have to follow the rules. Jabta will also be deployed so that there is no stampede.

After the clean-up efforts, the power merger has its way...