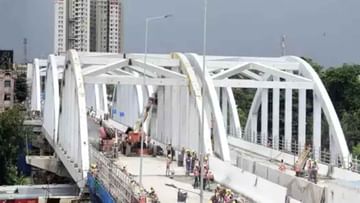 Tala Bridge: The newly constructed Tala Bridge is opening three days before Mahalaya. All preparations are over. The bridge is ready. Chief Minister Mamata Banerjee will inaugurate on Thursday afternoon.

Kolkata: Received before Puja. Two and a half years of waiting is over. Tala Bridge is opening today. In the afternoon, the inauguration was done by the Chief Minister. For the time being, the bridge will be opened for small traffic.

The newly constructed Tala Setu is opening three days before Mahalaya. All preparations are over. The bridge is ready. Chief Minister Mamata Banerjee will inaugurate on Thursday afternoon. This bridge is one of the most important means of connecting the suburbs with North Kolkata. Great relief as it opened before Puja.

In September 2018, all bridges in the state underwent a health check after the Magherhat bridge collapse. In October 2019, it was decided to demolish the Tala Bridge after seeing the health examination report. After that, the demolition of the bridge started from February 1, 2020. That work was completed in April of that year. Larsen & Touborough Limited started construction of the bridge in August.

After 2 years, Tala Bridge is being launched in a new form. The experts of IIT Kharagpur have been testing the bearing capacity of the bridge for the past few days. 468 crore rupees have been spent to construct new Tala Bridge. The new bridge has 4 lanes. This 800 meter long bridge is divided into two flanks.


Although not heavy vehicles like buses or lorries now, only small cars and bikes will ply on Tala Bridge for now. According to administrative sources, heavy traffic will be allowed in a phased manner.

Ankita murder case: Sitka to recreate crime scene to get...