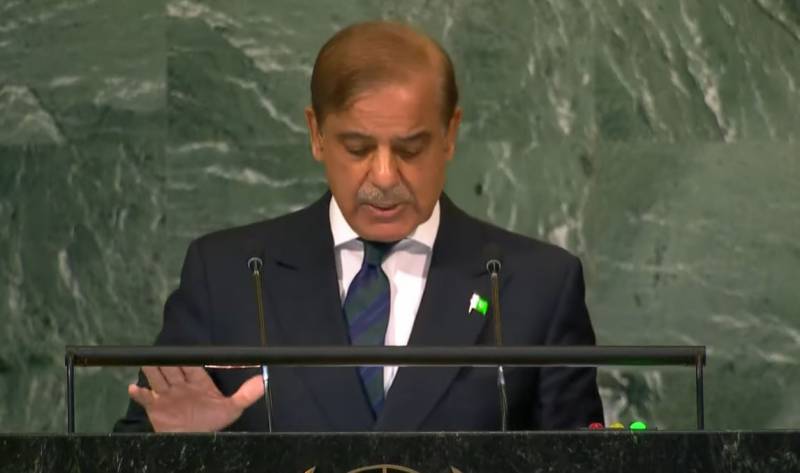 New York: Prime Minister of Pakistan Shahbaz Sharif has presented the case of Pakistan to the world. It is said that there has been a historic disaster due to flood in Pakistan. The world must help Pakistan.

Addressing the 77th annual session of the United Nations General Assembly in New York, Prime Minister Shahbaz Sharif said that we are not the cause of the problems we are facing. Due to environmental problems, Pakistan is being severely affected. Due to floods, people had to suffer loss of life and money. 33 million people including women and children were left homeless.

Prime Minister Shehbaz Sharif said that even today a large part of the country is under water. Climate change is a challenge. Many people have been affected by floods in Pakistan. Floods have wreaked havoc in Pakistan. I am here to bring you the first hand information of the flood disaster. For 40 days and 40 nights there was such a flood as the world has never seen.

Prime Minister Shehbaz Sharif informed the world about the ravages of floods due to climate change in Pakistan and said that one-third of Pakistan is submerged, the devastating effects of global warming have changed life in Pakistan forever. The people of Pakistan are paying the price of global aggression, the definition of national security has changed now, the international community will have to unite to face natural disasters and sit together to devise future strategies, otherwise there will be no arena for wars. will not remain.

India has made the occupied Jammu and Kashmir the largest military area in the world to usurp the rights of the oppressed Kashmiri people. According to the resolutions of the United Nations Security Council, the Kashmiri people will stand with the Kashmiri people until the conflict is resolved. War is not a problem. No solution, conflicts can only be solved through peaceful negotiations, we have to divert our resources to the people.

Muhammad Shahbaz Sharif said in his address that today when I am standing here to tell about my country Pakistan, but my heart and mind are still in my country, the trauma we are going through cannot be described in words. can go He said that I am here to inform the world about the real facts about the devastation caused by the climate disaster which has submerged one third of my country.

The Prime Minister said that for 40 days and 40 nights, a devastating flood has been imposed on us, which has broken the climatic record of centuries. Even today, a large part of the country is submerged in water. 6.5 million pregnant women are at risk. He said that more than 1500 people have died due to flood, including more than 400 children, many are at risk of disease and malnutrition. He said that due to flood, people had to suffer loss of life, 370 bridges were destroyed, 1 million cattle were killed.

The prime minister said that preliminary estimates indicate that more than 13 thousand kilometers of roads have been damaged due to floods, four million acres of crops have been washed away. , millions of displaced people are still searching for dry land to pitch their tents with their families, futures and livelihoods at stake. He said that Pakistan is being affected due to environmental pollution, Pakistan has not seen such a natural disaster, first we are facing rising temperature and now floods, although the carbon that is being sent to the atmosphere in the world, Pakistan’s It is less than one percent, we are not the cause of the problems we are facing.

The Prime Minister said that Pakistan has never seen a bigger and more devastating example of the effects of global warming where life has changed forever. He said that during this calamity I visited and spent time in every corner of our devastated country. People in Pakistan ask why this happened to them. The undeniable and painful fact is that this calamity is ours. Not by reason, but our glaciers are melting fast, forests are burning and heat waves have exceeded 53 degrees Celsius, making it the hottest place on the planet.

The Prime Minister said that we are going through a devastating monsoon, as the UN Secretary General has so aptly described it, one thing is very clear that what has happened in Pakistan is not confined to Pakistan. will

He said that I thank those who helped me in difficult times on behalf of my nation, I am grateful to the Secretary General of the United Nations for his visit to Pakistan, the Secretary General has seen the flood victims with his own eyes. He said that part of the development fund is also being spent on rescue and relief works, an amount of 70 billion was distributed among the flood victims.