No officer will go back from Punjab without our permission, Parvez Elahi ATN News 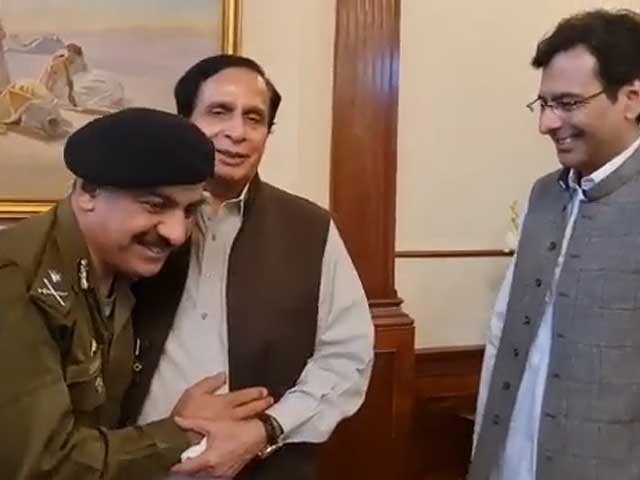 Lahore: Chief Minister Punjab met CCPO Lahore and while giving orders to him to keep duty, said that the provincial government will not allow any officer to be transferred.

According to Express News, CCPO Ghulam Mehmood Dogar had a meeting with Punjab Chief Minister Pervez Elahi in which Monis Elahi was also present. Pervez Elahi congratulated CCPO Lahore and directed them to continue their duties while appreciating their work.

Chaudhry Pervez Elahi instructed CCPO Lahore to work here, they will not let you go, you should work hard to eradicate crime, the government will provide full protection and support.

Apart from this, a police conference was held in the civil secretariat under the chairmanship of Punjab Chief Minister Chaudhry Pervez Elahi, in which he said that the duty of the police is to treat every questioner who comes to the police station without discrimination. Police culture will also change.

Chaudhry Parvez Elahi clarified that no officer from Punjab will return to the federation without our permission, constitutionally and legally, the provincial government can stop officers under public interest.

He said that people should not have to go to the police station repeatedly for FIR and charge sheet. First Information Report should be strong as per law. The process of investigation should be made better and more effective so that the culprit cannot escape punishment.

He said that police officers with law degrees will be made investigation officers. Losing a case due to poor investigation by the police leads to a sabbatical. Patrolling police posts have been established to support the Punjab Police, now they will also solve other problems of the department.

Parvez Elahi said that three copies of FIR should be sent to CM Monitoring Cell, concerned DIG and RSP for monitoring. Chief Minister Punjab said that they are examining the establishment of a force consisting of retired commandos of the Army for the Kacha area. Chaudhry Parvez Elahi.

I pay tribute to the police officers and employees for their excellent performance in maintaining peace and order during Muharram.

He further said that the common man should get immediate justice in the police station, support and cold air will come from our side to the police, the cold air should go down to the people. Bullet-proof vehicles and special vehicles with armored, bullet-proof jackets and trackers will be provided.

The Chief Minister announced that bunkers will be set up in the Kacha area, while the Special Force posted there will be given a special salary package, apart from that, modern apartments of 8.8 kanals will be constructed to meet the residential needs of the officers. will