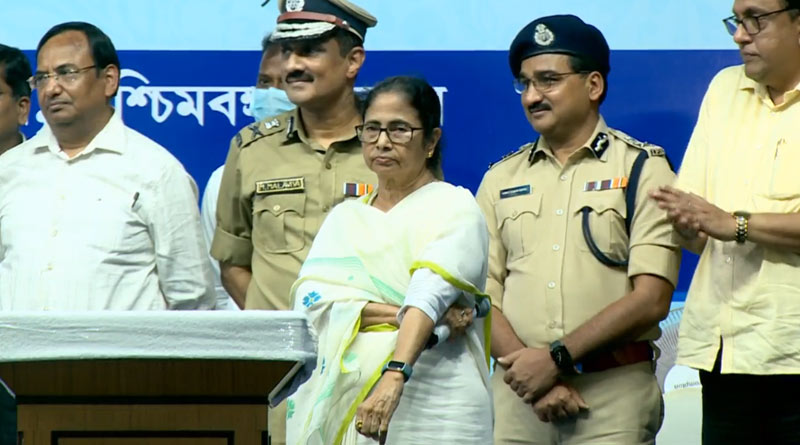 News Daily Digital Desk: The long wait is over. A big gift to the townspeople before Puja. The new Tala Bridge was opened by Chief Minister Mamata Banerjee. The Chief Minister inaugurated the Tala Bridge at 5:30 pm as per the pre-announcement on Thursday. The connection between North Kolkata and the suburbs became very easy as this bridge was reopened. In 2020, the demolition of the bridge began. After almost two and a half years, ‘Hemant Setu’ reopened in a new form. Railway representatives were also present at the inauguration of the bridge. The chief minister said from the event stage that the state wants to buy the railway land adjacent to Tala Bridge to build a roof over the heads of poor people. The Chief Minister appealed to the DRM that the Railways agrees to sell the land.

It was known that the new Tala Bridge will be opened before the Puja. There were fears that the inauguration could be further delayed as the final report of the experts was delayed. However, as all the work was done on time, traffic started on ‘Hemant Setu’ before Mahalaya. Heavy vehicles will not ply on the four-lane bridge now. Later, the health check of the bridge, the bearing capacity will be checked, but a decision will be taken to run goods vehicles, said the Chief Minister.

Speaking about the role of railways in the reconstruction of Tala Bridge, the Chief Minister said, “Railways have been doing demolition work for 4 months. I told PWD, act quickly. Bobby-Pulak-Arup all helped a lot. Thanks to the locals. But I heard that the locals have some problems. Told PWD, will do all the work in 2-3 months. The entire money for the construction of this bridge was given by the state. I thought, Railways will not take money as social work. But the railway has taken Tk 90 crore.”

After that, he addressed the Railway DRM present on the stage, “There are 145 poor families here. We want to buy the land that the railway has here. I want to build a house for them on that land. Because the state has no more land here. If they don’t get railway land, they will have to build a house by the canal. We will buy the land from Railways with money, money will not be a problem.” Then he said to Firhad Hakim, “Look at this matter. Don’t worry about money for this. This is my promise to the poor people. Whatever the cost, we will put a roof over their heads.”

The Chief Minister has proposed three flyovers in North Kolkata in the coming days to further improve the city’s connectivity. He said that these will be made if the financial situation is favorable. In this context, he also joked with Mayor Parishad Atin Ghosh. In his words, “Atin used to be north-south. Now when I bridged the bridge, you didn’t say anything. A lot is happening in North Kolkata right now. There will be more.”