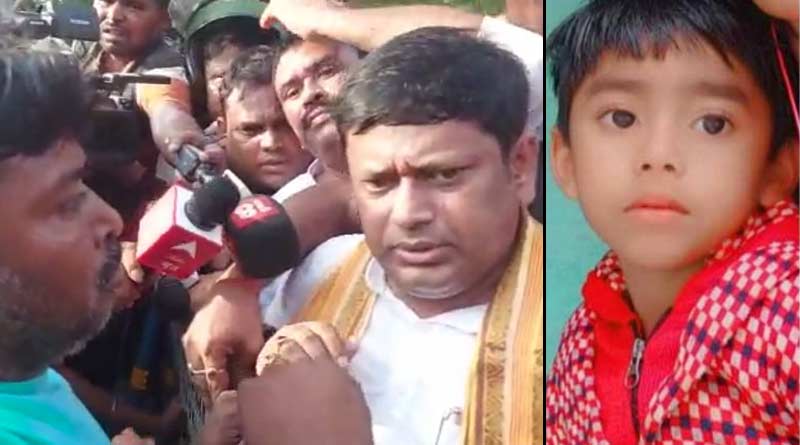 News Daily Digital Desk: Santiniketan riots over child deaths State BJP president Sukant Majumder faced protests while meeting the family members of the deceased. Like Locket Chattopadhyay, he too was prevented from entering the village by the residents. Their words are clear, “I don’t want politics. I want punishment for the accused.” After a long disturbance, six people including Sukant Majumdar were allowed to enter the village by the agitated crowd.

After being missing for three days, the child’s body was recovered from the neighbor’s roof on Tuesday. The incident caused tension in the area. State BJP president Sukanta Majumder left for the house of the dead child in Moldanga of Shantiniketan on Thursday afternoon. The leaders and workers of the party were with him. But they were stopped at the entrance of the village by the excited crowd. They did not want any color of politics in the death of Khud. BJP leaders tried to enter the village by convincing the villagers. The situation became heated due to residents’ objections. The police tried to bring the situation under control. At that time, the BJP workers got involved in an altercation with the police. A situation of tension is gradually created around the incident. Finally the villagers said, not all, but five to six people will be allowed to enter. Just like that, 6 people including Sukant Majumdar entered the village. Talk to the family members of the deceased.

Incidentally, BJP MP Locket Chatterjee went to Santiniketan around 12 noon on Wednesday. But before entering the village, the local women started protesting by blocking his way. They claim that they do not want to give any political color to this death. BJP will not be allowed to enter this area. Meanwhile, the OC of Chandrapur police station came and stopped the BJP leader. Palta Netri claims, “I have brought permission. Mother’s lap is empty, I demand her justice.” After that he went to Santiniketan police station. BJP leaders and workers-supporters sat on dharna outside.