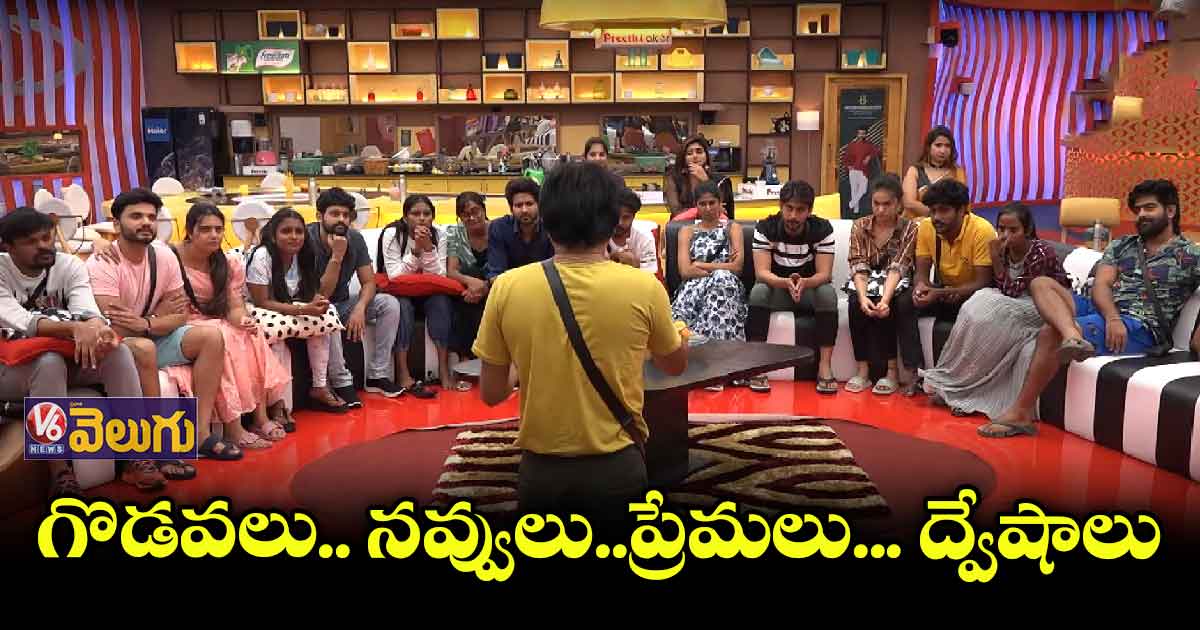 Thief and police game in the forest enters the third day. The violence that lasted for two days continued on the third day. Whose strategy was successful in this task? Who won? Police or thieves?

The flame that was kindled still burns today. As the episode begins, Neha and Nana create a ruckus. Marina was pulled over for not following the rules. Marina flipped out, saying, “Would it be wrong to go to my rack for the medicine for the hand wound?” Neha taunts that Dur Dur means she can’t do everything. Revanth gets angry again that the real game is not right and everyone is playing wrong. He gets angry when Neha says she can do it. Inya’s pain is different. She burst into tears again, saying that she didn’t mean to hurt anyone except that she wanted to play like everyone else was cheating. Anyway, task done. The police team won. 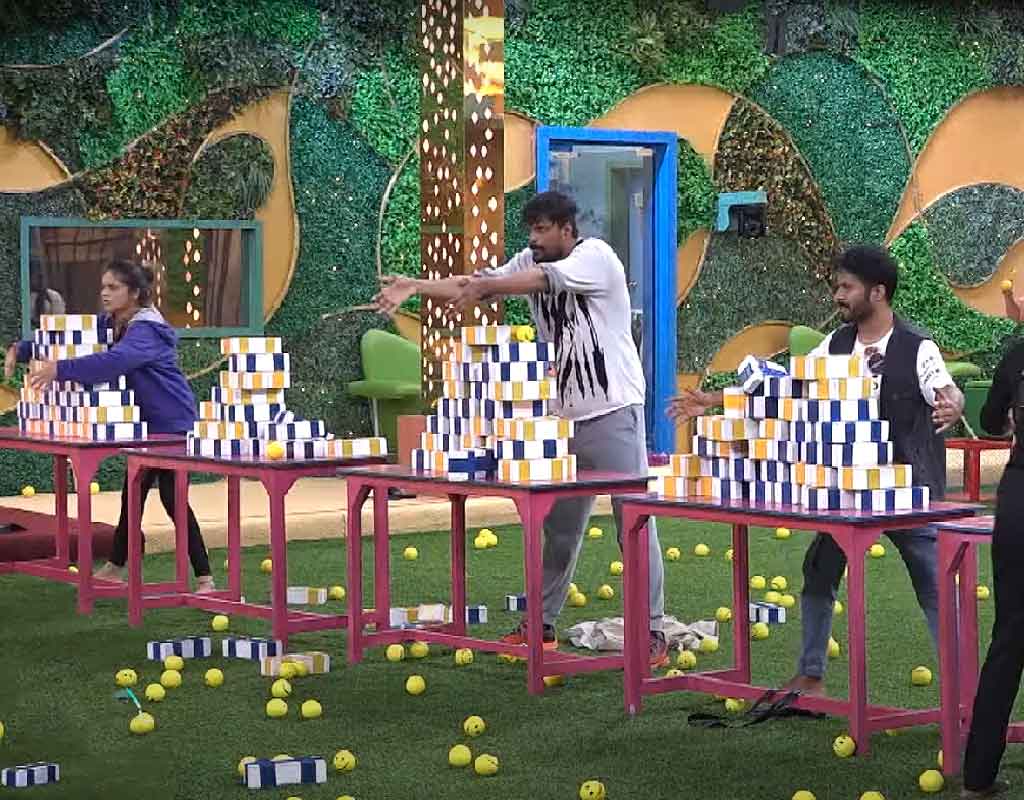 Four men have been selected for the captaincy competition this week. At the end of the game Geethu had fifteen thousand eight hundred rupees and Yabhai’s toys and Bigg Boss selected her for the captaincy contest. And Srisatya declares that he is not fit to contest as he has the golden coconut. After that everyone discussed for a while. They argued over who did what in the game and how it happened. Some cursed. Some laughed. Others were exhausted. Others were outraged. After that, when Bigg Boss asked to choose the best performers, along with Geethu and Sreesatya, Adhireddy, Feima and Sreehan joined the list. Bigg Boss gave them another task. Everyone should bring the farthest bricks and stack them like a pyramid on the table. After that all contestants hit them with balls. Whoever has the most bricks standing when the buzzer sounds is the winner. But something strange happened in this game. I gave up in the middle as I couldn’t play any song which was frustrating to win the tasks. With that, the other four also competed. By the time the buzzer sounds, there are more bricks left in the Faema pyramid. But director Revanth disqualified them for breaking the rules and pushing the brick with their hands. No matter how much Fayma screamed that she couldn’t do it, she stuck to her decision. He also qualified three others for the next round. Everyone knows that there is never enough food in the Bigg Boss house. Also, no luxury budget this week. That is why Ration Manager Sudeepa is very careful to ensure that food is available to everyone. But Revanth was hurt by one thing. People get stomach ache if they eat like this, Revanth doesn’t, am I not human? Anger for not even eating rice at night and hurt for saying it. Finally she showed that anger to Sudeepa and she reacted strongly. She said she never said that and never used the word “real people”. But not hearing it, Revanth cursed and threw away the mic. She shouts that she is very careful as ration manager, everyone is cooperating but Revanth takes what he wants but doesn’t say anything, if he talks like this then he has to say everything. Marina justifies that Sudeep’s words are true and she didn’t say anything wrong about Revan. Swayamvaram for Raj.. Confusion for Arjun

Love stories are going well in the Bigg Boss house this time too. The audience has already found out that there is something between Aarohi, Suriya, Arjun and Sreesatya. Today’s episode has once again proved that their suspicions are true. The Surya tribe feels that Arohi got injured in the game because of Srihan. He tells Faima what happened and feels bad. After that he sat next to Arohi and comforted her for a while when she cried. Srihan and Neha discussed about Arjun and Srisatya. When Neha innocently asks what is going on between them, Sreehan assesses that Arjun has feelings for Sreesatya and he doesn’t care. Neha opened the new story by saying that she also sees Vasanti the same way. Srihan said that he did not listen to control him and even when Srisatya asked him to call him Jyeshthan, he did not say OK. Neha gives the finishing touch and says I think they are doing all this for the show. After that, while everyone was working on the table, Sreesatya asked Raj to tell him which of the unmarried girls in the house he liked. He loved Sri Satya. With that, Neha got stuck in the middle.. When Raj said his name, Arjun said that he was hanging from there. Arjun’s face was also jealous. Everyone laughed for a while.

Srihan was found today by Innaya who was looking for a way to fight with him. Inaya Fayma was supported in the first round of the captaincy task. She discussed the matter with director Revanth. Srihan also tried to say that in that attempt he pushed the brick with his hand. Srihan, who came there, told Revanth that no matter what you do, as a director, you have to take your decision. That’s it.. Iniya’s fire is over. She started screaming like a quail calling me a quail. No matter how much he said I didn’t tell you, she kept screaming. Srihan also raised his voice. But unable to bear the pressure, Iniya left there. However, Iniya followed him and fought him. With that, Geethu entered the scene. Inaya didn’t listen no matter how many times he said that he didn’t mean you, I was there too. He kept digging, saying it’s me, not you. It stopped for a while if it was given a break in between to announce the task result. After getting it again, Srihan got scared and ran away. He felt he could claim to be human and steal, but calling him a quail was wrong. Geethu started teasing her saying that quail is not a wrong word, sparrow is called sparrow, small and cute, pretty girls are called quail as Iniya kept shouting. You don’t say anything, I don’t want to hear it, go away, Iniya whined and went to Vasanti who was next to her. For a long time Inayani went on shouting in his own style. Geethu said in his own style that he cried because he was not allowed to speak during the nominations and now he is satisfied, making everyone laugh. All in all, some fights, some laughs, some love, some hate, the house felt a little fresher today. The second round of captaincy will be held tomorrow. Adhireddy, Sreehan and Sreesatya are going to contest. It remains to be seen who among them will last till the end and who will become the captain.

Emergency services call for vans on fire on Glasgow’s Great...

US restricts more tech exports to keep chips from China...

The Warhammer community mourned as one of its girlfriends.ATN...

Farooq Abdullah said that NC’s struggle against the abrogation of...

Andheri by-election, Thackeray became the candidate, what about BJP? ...

Emergency services call for vans on fire on Glasgow’s Great...

Bengalis used to turn into scorpions if they were shown...

US restricts more tech exports to keep chips from China...

Christians turned Catholics occupied the lands of the institution, now...

After Sidhu Musewala, Another Singer Murdered, Moved To Hospital ATN...